I hope you have gone through the first part here. We will continue to build on the same blocks and try to add more functionality to our seemingly simpe class.

Requirement: You should be able to change the side for the square object. In doing so, perimeter as well as area attributes should get updated.

First we will add a test function where can change the side value of an object and perimeter,area attributes should update based on this new value

In order to accomplish our requirement, we will make perimeter and area attributes as properties using property decorator. They will no longer be updated in the init function. This is how we can do it. 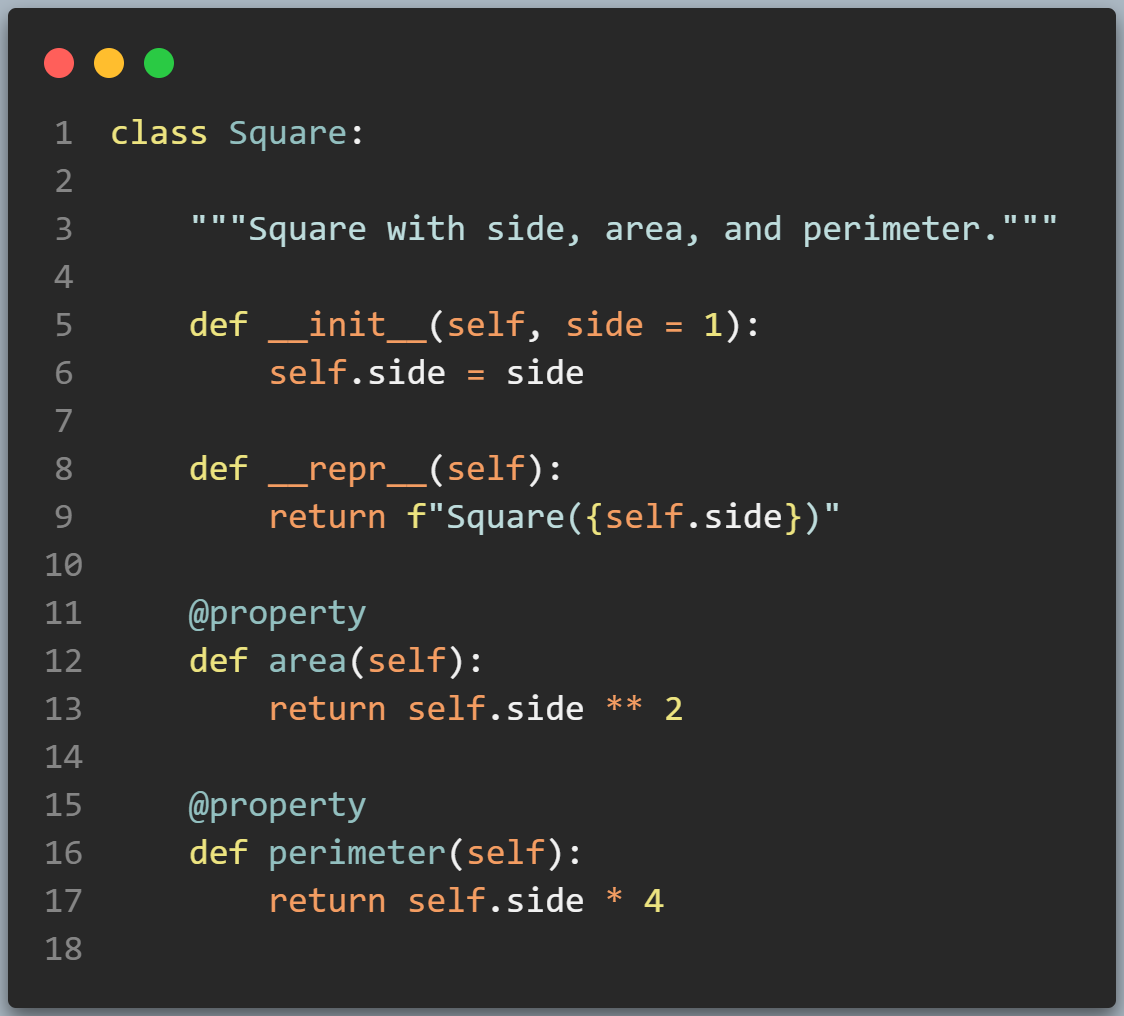 And sure enough, our test cases pass

Whenever perimeter and area will be accessed for a object, these property methods will execute and return the correct values. Folks coming from Java can draw an analogy of these @property construct with setter and getters.

Lets move towards our new requirement as follows.

Requirement: If perimeter of a square object is updated, the side should get updated automatically based on the new value.

We write a test function first 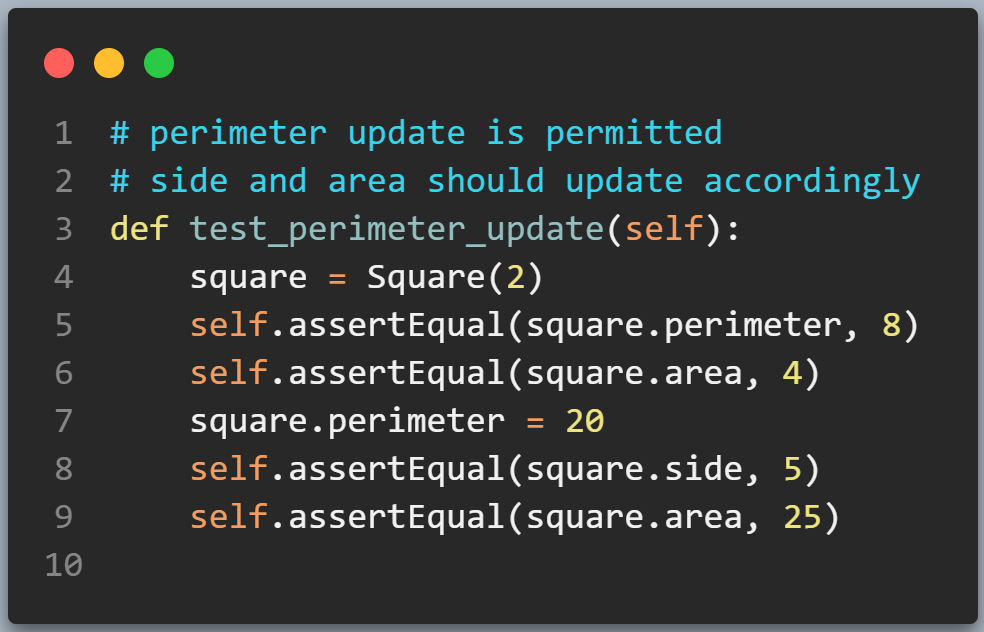 If you run test at this point, it will fail saying unable to set perimeter attribute. That is fine. I just want to showcase the feedback loop/workflow you should get used to.

In order to update perimeter, we can just write a property.setter for perimeter property

update side according to perimeter’s new value

Now if you run the test cases, they’ll pass!

This next requirement is pretty small and closely related to the previous one.

Honestly, there is not much to be done here. Not writing setter for area property will itself prevent any explicit update to area attribute.

What we can do is write a quick test to check that we aren’t able to set area. 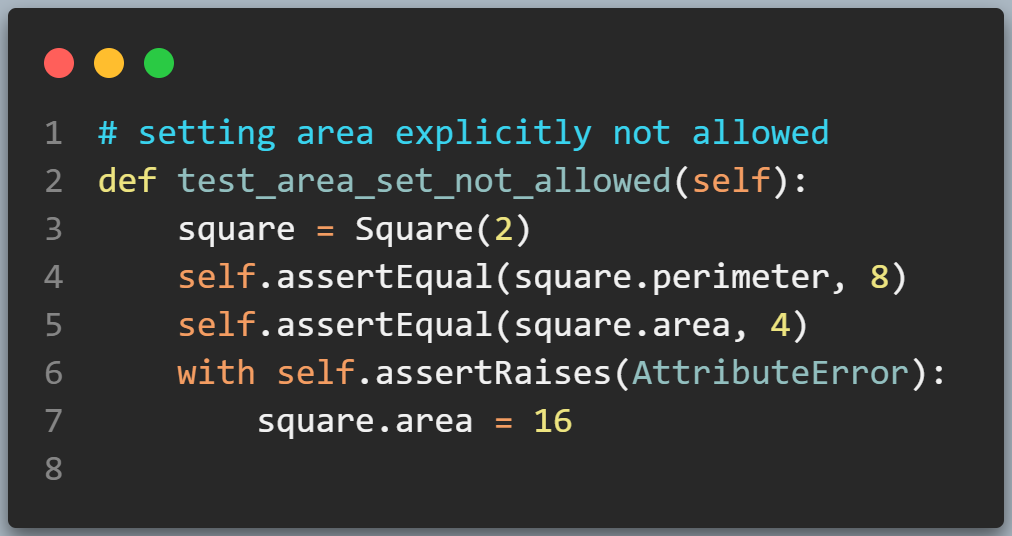 Now run the tests one more and make sure they pass

This next requirement is pretty small and closely related to the previous one.

Requirement: You cannot have negative side attribute for a square object

While this may seem like a small change, we need to be careful of its implications. Worry not, for we will smartly handle this logic in our existing code making minimum changes. I’m a strong propoent of writing less but efficient code when possible. My manager used this quip all too often and I agree wholeheartedly.

Untested code is not really code. No code is the best kind of code.

So for this requirement, we are supposed to make sure setting negative side attribute is not allowed. By virtue of this, we’ll need to make sure of a few things

As always we will first write a test function that matches above understanding. 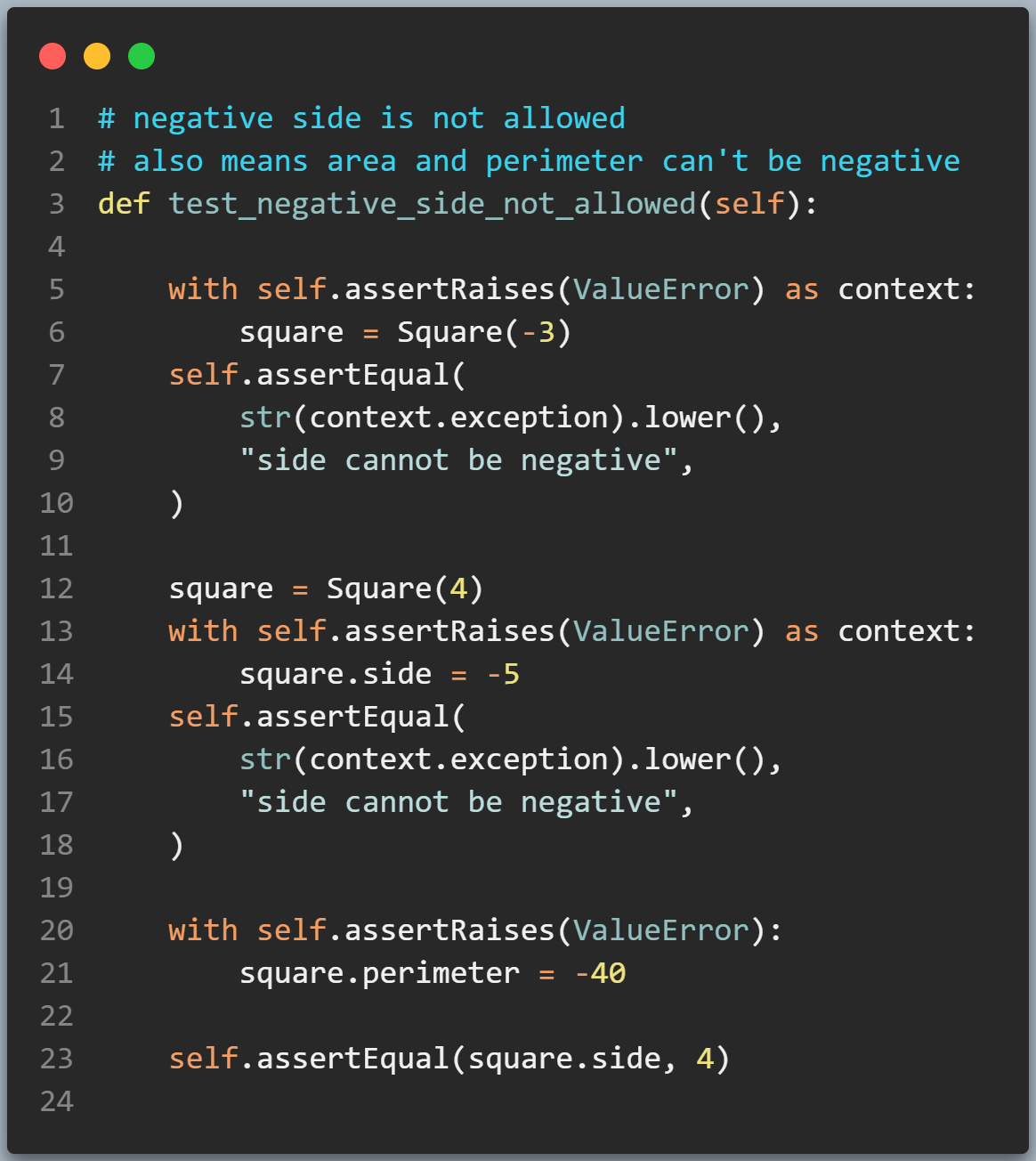 test function for this final requirement - side cannot be negative

If you try to run test suite, you will notice that it is currently failing for this particular test ie it is allowing for an object with negative side to be created. Instead, it should ideally throw the error as specified in our test function. We will fix this soon.

We know our requirement. We wrote and failed the test case. Good job! Now it’s time to write the code.

We don’t want to allow negative side attribute to be set. We will use some property magic and a setter/getter for our side attribute. 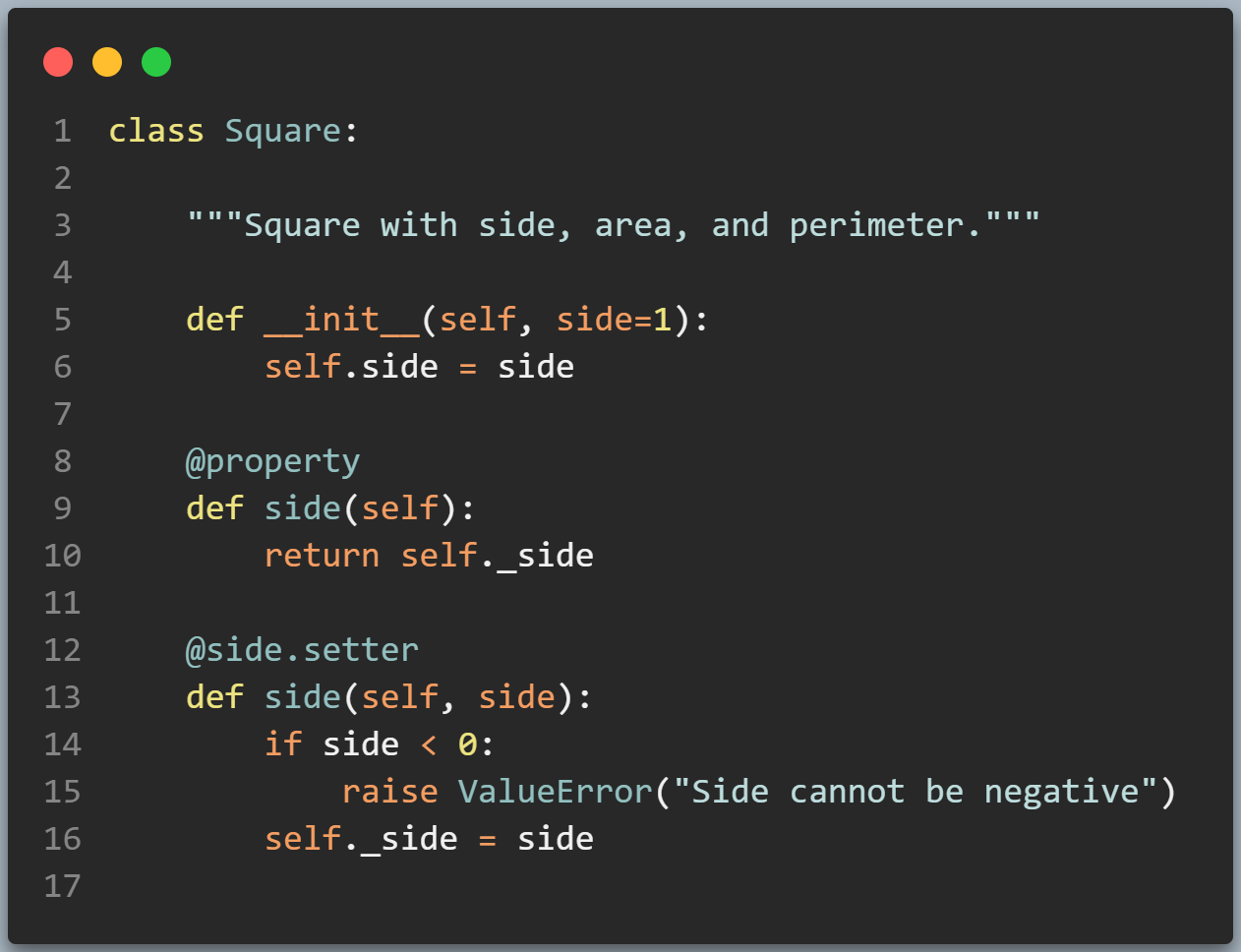 changes to prohibit negative side attribute

There are a couple of important things to note here.

I implore you to take a look at property in Python. It is such a powerful tool to add to your toolbox.

Having written the code for our Class Square, not lets run our test suite one last time.

Voila! All our test cases pass!

For your reference, I am pasting the screenshots of final version of our Square Class(square.py) as well as the testing module for the same(test_square.py). 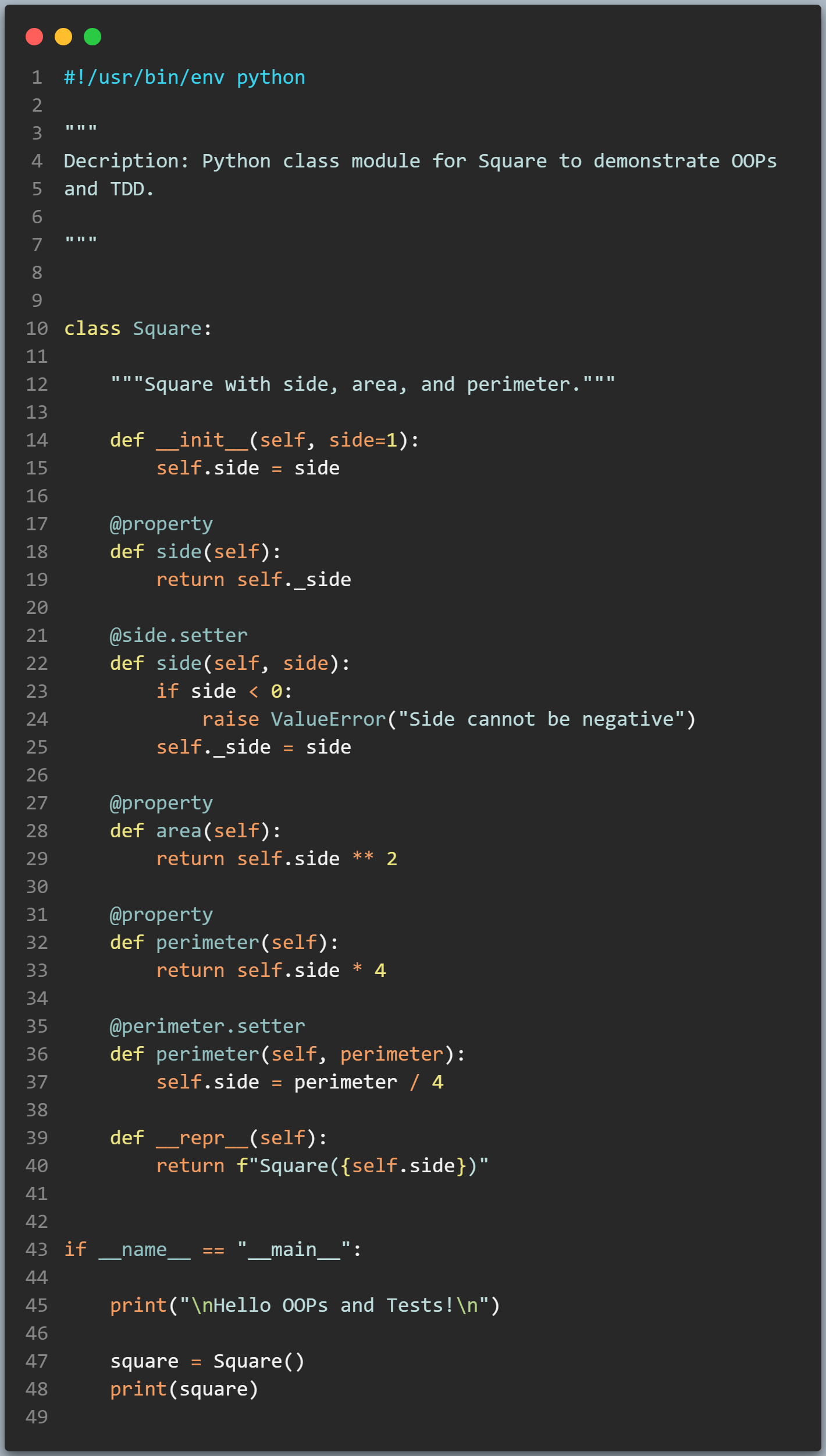 There was a time at the beginning of my career when I shied away from writing detailed tests. They don’t really teach its importance in schools and I wonder why. I feel it should be as natural as other tools/principles at a developers disposal - like git, SOLID, YAGNI.

I lucked out in that I came across a manager who really forced us to rigorously(and blindly) embrace Test-Driven-Development. Today I’m certainly happy that I did. Believe it or not, we had hooks that didn’t allow us to deploy PRs unless we wrote one extra test. That’s how we improved coverage for one of the old projects that we found ourselves working on - and it didn’t have ANY tests in the beginning.

Especially if you are joining a new team that’s already working on an ongoing project, I would highly recommend:

I hope this couple of articles help you understnd basic OOPs at the backdrop of TDD. Going forward, I plan on writing more often and gradually advance on to difficult to understand topics using simple examples.